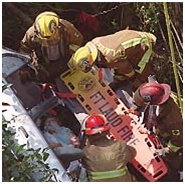 Take a moment and read this story about a true life survivor.  Forget about the CBS Reality Show, my grandmother is the real survivor. On my most recent trip to Florida my grandmother was honored at a WNBA Basketball Game in Miami. The Miami Sol honor "heroes".  That is women who have made a difference in the community or have something special about them.

For anyone that doesn't know, in the summer of 2000 my grandmother went to pick my sister and her boyfriend up at the airport at 3 am due to a late arriving flight. On her way to FT. Lauderdale International Airport she was struck by a driver who was driving in excess of 90 miles an hour on I-595. Her car spun around, hit the guard rail, and fell 40 feet upside down into a Florida swamp, or mangrove as they call it. For the next 3 days my grandmother survived on 2 sucking candies, rain water she got from soaking golf socks, and a piece of gum. Not withstanding near 100 degree heat in the hot August sun, bugs and insects, and the fear of alligators and snakes. Finally on the 4th day she was found by street cleaners who happen to clean that part of the highway once a month. It took 25 rescue workers about 1 hour using heavy equipment to rescue her. She was rushed to Browed medical center and released 4 days later. I am happy to say she is on the mend even though she is still living with the pain both mentally and physically from the accident*.

Her story made international news. Her story made every major newspaper as well as news channels and she was interviewed by Dianne Sawyer (GMA), Katie Couric (Today Show), and the CBS Affiliate morning show.  She was flown to NYC to do the Rosie O' Donnel Show, Sally Jessy Raphael Show, Today show live interviewed by Ann Curry, 48 hours did a special on her, Beyond Chance also did a piece on her for the lifetime network as did The travel channel.

My grandmother is a true life survivor and an inspiration to many.  To this day 3+ years after the accident she still gets recognized in Southern Florida especially Pembroke Pines where she lives.  Many people come up to her and tell her that they prayed for her and want to give her a hug and tell her she was an inspiration to them. ESS Promotions recognizes that Tillie Tooter, "my grandmother", is that special type of woman, and along with the rest of the country honor you not only as a courageous female but as a courageous person who through it all had a tremendous will to live.

Here is a write up The Sun Sentinel, a South Florida newspaper, did on my grandmother after she was honored at The Miami Sol WNBA Basketball Game on August 9th, 2002.

The Sol honored 85-year-old Tillie Tooter of Century Village in B as the 15th hero of the season during a halftime presentation. She was honored for her courage and spirit. Tooter, then 83, survived a car crash on interstate 595 and endured three nightmarish days of being trapped in her vehicle while waiting for help. She was on her way to the airport to pick up her granddaughter when another vehicle slammed into her car forcing it off the highway and down a 40-foot embankment. She relied on her survival skills to help make it through the ordeal. Tooter was presented an official WNBA Basketball autographed by the sol and an official sol jersey with her name on the back. ...